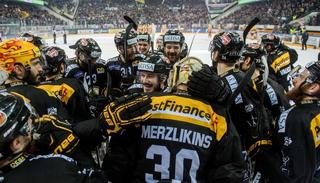 43. Peterborough Petes - Brian Zanetti - Defense
As a U17 player, Zanetti was one of the best defenders in the Swiss U20 league this past season and was also a standout for the Swiss National team at both the U17 and U18 levels. Not to set the hype bar too high, but his season was among the best in the history of the league, comparing favourably to the likes of Swiss standouts Roman Josi and Luca Sbisa at the same age. With Declan Chisholm, Jacob Paquette, and Hudson Wilson all moving on, Peterborough was in need of desperate help on the blueline heading into the year and they have to be hoping that Zanetti can be an immediate impact player.

Scouting Report:
A big and lanky defenceman who is eligible for the 2021 NHL Draft. Zanetti possesses smooth skating strides and a decent lateral movement, however, he could work on his overall mobility and needs to get quicker when making turns. Also, he could improve the explosiveness in his first strides. Thanks to his size, he also possesses a long reach and plays with a long stick, that he knows how to use effectively. Shows a good timing with the stick, is good at chipping pucks and is effective when interfering plays and passing lanes. Is able to poke pucks away with his long reach and doesn’t give opposing puck carriers much space. Although he is big in size, he does not necessarily play a very physical game and prefers to use his stick along the boards rather than closing the gap physically. Something he would definitely need to work on in order to fit in the North American type of game better. Nevertheless, he reads game situations in the defensive zone well and possesses a sound positioning game. Also in front of his own net, he could play the physical card more effectively to keep forwards away from scoring on rebounds. Needs to gain lower leg strength and bulk up in order to match his size. Offensively, Zanetti is a guy that likes to join rushes and gets involved in the offensive side of the game. That shows his stats from the previous season with HC Lugano U20, where he scored 8 goals and added 19 assists in just 38 games. He sees open ice very well and is good at skating into those areas, making him available as a fourth forward when breaking out through the neutral zone. Really identifies those open ice sports well and sees passing lanes. Seems to be very aware of his line mates and is able to play quick passes as he often knows already where to put the puck next when attacking. Shows good vision and overall offensive game situations. Thinks quickly and can carry the puck up ice from his own zone into deep into the neutral zone. He is still a raw talent and needs to work on his weaknesses quite a bit but the upside can be seen. - Dennis Schellenberg

È stato schierato sia in 4vs4 e a volte pure in BP.
HCL 4 EVER